What Peasie didn’t know about bears

Peasie grew up chasing bears alongside her big sister Sidney, an Australian cattle dog with a fearlessness that made every bear they encountered turn and run. Or climb the nearest tree.

Peasie just assumed that’s what you do with bears – you chase them away, and they run.

Peasie and Sidney looking for something to get up to

It’s been 5 years since Sidney’s passing, and this is the first bear season since Peasie has lost her eyesight. Now she has been overcompensating and everytime it gets dark she rushes around the backyard barking and charging at the fence, to make sure everything within earshot knows she’s got it handled.

This plan was working fine until autumn arrived and brought the bears along with it.

This year, the first time Peasie sensed the large body of a bear in our yard, she kicked into high gear. She ran top speed towards where she figured the bear was and barked her teeny Boston terrier head off. The bear hopped the fence and Peasie was a success.

Except in the eyes of my husband, Chris, who was there to witness the whole episode, petrified that Peasie was going to get hurt. He yelled at her to come back, and she would not listen. She was intent on making sure the bear didn’t dare come back.

This is the first time I have ever heard Chris truly get mad at Peasie. Really, really mad. He stormed into the house with her and shouted a bit more about bears and danger and safety. It was an emotional evening.

The next day Chris explained to Peasie how bears can be dangerous and how someone as small as Peasie could get seriously hurt if she got too close to them. He told her how precious she is and how important it was for her to stay safe. And then the most amazing thing happened. She stopped chasing bears.

Just like that – she no longer seeks out bears to intimidate. In fact, she waits for us to check the yard first with a flashlight. And she creeps just far enough onto the lawn to get a pee out, and then moves quickly back to the house.

As it turns out, it is a complete surprise to Peasie that bears can be dangerous. We had never taken the time to tell her. During all those years with fierce big sister Sidney by her side, we had never worried an ounce about her safety around bears. We knew Sidney would not let anything happen to her.

So, in a way it is a blessing that this frightening event happened. It was our chance to make sure Peasie is completely informed about bears. And it was Chris’ explanation that helped her understand what the potential issue can be.

What I love about the way Chris spoke to Peasie is how he gave her the details she needed to help her create a new understanding of the situation. He didn’t just tell her that she needed to do what she was told.

This is what shamanic dog training gives our dogs; the chance to make sense of their lives with us, so they can make their own decisions. 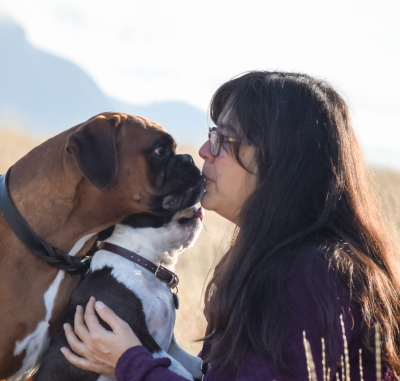 Tamryn Fudge is an animal communicator, shamanic practitioner and the founder and teacher of shamanic dog training. She has almost 25 years experience helping people and their dogs find more peace, friendship and freedom together.

Get the next article

delivered right to your inbox.

Enjoying what you're reading?

GET THE NEXT ARTICLE DELIVERED RIGHT TO YOUR INBOX

Get the next article

delivered right to your inbox